Which job offer would you prefer? A value vs. growth allegory

Suppose I was to offer you two job opportunities. For one, I would pay you a flat US$500k a year, in perpetuity (the value option). For the other, I would pay you US$100k a year to start, but would increase that by 20% per annum thereafter (the growth option). Which one would you prefer?

It's a trick question. If the pay really would be increased at 20% pa, without any risk and for an indefinite duration, you'd be a fool to take the immediate US$500k value option (assuming your age was not a relevant factor). Although it would take nine years before you would be earning more per annum under the growth option ($516k per annum by year 10), by year 20 you would be making US$3.2m a year, and by year 30, US$19.8m. Such is the mathematics of compounding.

However, crucially, it would take much more than 10 years for you to be better off under the growth option, because although by year 10 you would be earning more money, you would have foregone the investment returns you could have made on the additional funds you would have received under the value option for the prior decade. Let's ignore living costs and taxes for the sake of argument, and assume that under the value option, you were earning, saving and investing US$500k per year at an assumed rate of return of 7.5% in equity ETFs. Meanwhile, under the growth alternative, you would make, save, and invest US$100k in year one, US$120k in year two, and US$144k in year three, and so forth, at that same 7.5% rate of return.

By year 10, you would have accumulated US$7.3m in net worth under the US$500k-per-year value option, which by that stage would be generating US$550k per year in investment income. Meanwhile, under the growth option, you would have accumulated 'only' US$3.4m, earning US$257k per annum in investment income. Remarkably (because the economics of compounding work for investment returns as well), the net worth paths would not cross until year 18 (where the growth option would have yielded a US$19.0m net worth, vs. US$18.5m for the value option).

If you were wise, you would therefore want to inquire as to how you could be confident that I really was going to be able to pay you 20% more per year for almost two decades. How much risk is there? Because I have to succeed in paying you 20% more for a very, very long time before the mathematics would work in your favour. A lot can happen in 20 years, and a lot can go wrong, and you should therefore be sceptical about whether it was really the right choice, given that the value option is resoundingly the best choice under all scenarios where the status quo is perpetuated for a full 18 years. For 18 years, the growth choice is the riskier option vulnerable to unexpected change. People have long known that a bird in the hand is worth two in the bush, and for good reason.

Why is this thought experiment interesting? Because this is exactly the situation that exists in markets when investors are confronted with a choice between buying a 'low growth' value business (with a high starting-point free cash flow yield, but low prospects for growth), and a high multiple growth business (with a low starting point yield, but a promising growth outlook). And the mathematics work in exactly the same way.

Take Tencent for instance - the Chinese online gaming and social media company, which now trades at about 50x earnings (making about US$9bn in profit on a US$450bn market capitalisation). That is equivalent to paying US$5m now for a US$100k a year income stream that - it is hoped - will grow rapidly for a long time. By comparison, you can buy plenty of old world, boring businesses with lacklustre growth profiles at 10x earnings and free cash flow. BMW preferred, for instance (which I have blogged on in the past) trades at 7x earnings and 10x free cash flow. That would be equivalent to using the same US$5m investment to buy a business yielding US$500k a year in immediate income.

Which one is likely to work out better? With very few exceptions, the bird in the hand value option will beat the birds-in-the-bush growth option, because so much has to go right for so long to make the numbers work. Tencent is already a huge business (half of its earnings come from online gaming, where it already generates monthly gaming ARPU of US$25-30 in a highly penetrated market - good luck growing that by orders of magnitude in the future). Value investing works because investors seem consistently unable to comprehend these basic mathematics, and are instead consistently captivated by exciting growth stories. For most people, a good narrative beats abstract statistics.

One of the problems is the way investors look at things. An investor in Tencent is not liable to look at things the way I have described them above. They are instead liable to say "I think earnings will grow at 20% a year for the next three years, and if the multiple stays at 50x, then I will make 20% a year". That is the typical way growth investors look at things. Unfortunately, while that approach might work in some instances for some periods of time, in the long run, on average, over time, one thing and only one thing matters: cash in versus cash out. Investors would do themselves a favour if they stopped looking at things in terms of growth rates and multiples in this manner. But they won't stop.

Investors try to beat the odds all the time, because they are overconfident. It's a human thing. They may think, while what you are saying is true on average, I have unique insights and capabilities as an investor, and I am therefore able to parse the wheat from the chaff. All I can say is, good luck to you, I wish you the best. But I prefer to bet with rather than against the odds. I would take the value option, because the numbers prove this to be the correct course of action in the majority of instances. 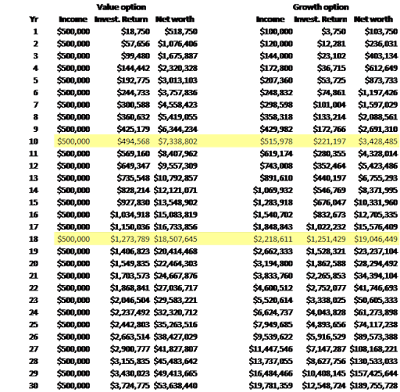 Lyall Taylor
Former sell-side Equity Analyst/regional Head of Research; long time stock market enthusiast; and current Portfolio Manager of a self-seeded fund (LTCP Fund) on Swiss-Asia Financial Services Pte Ltd's platform. If you are an accredited investor and have investment interest, you can contact me at lyall.taylor@swissasia-group.com for further information.

The post-GFC era has given rise to widespread investor confusion, as macroeconomic and market outcomes have deviated from the received econo...